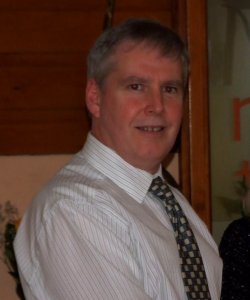 My first involvement with Rotary was in 2005 following the Indonesian Tsunami in December 2004. As owners of the Maekong Thai restaurant my wife and I decided to raise disaster relief money and with the help of the firemen from Bromsgrove's fire station we raised nearly £5000.

We wanted to make sure the monies we had raised were put to the best possible use and following some investigation I decided to donate the money to The Bromsgrove Rotary Club as I was confident all the money would go to those most in need. The Bromsgrove Rotary Club liaised with a Rotary Club in Indonesia who had for many years supported a maternity unit based in one of the worst hit areas of Indonesia. The maternity unit's building had been destroyed and the staff had relocated to a makeshift hut. They were in desperate need of medical equipment and supplies which the money we had raised helped to supply.

Over the following years I kept in close contact with the club and having seen the amazing work done by many Rotary clubs and the great camaraderie amongst Rotarians across the world I decided to join in 2009.

Since joining I have been actively involved in numerous projects locally and internationally as well as attending many of the social events including our club trip to Cyprus in 2013.